When you see a movie and it make you reflect on the character, plot and references in the story; then the movie is worth it. Airlift is one such movie. The movie begins to show punjabipan and no nonsense character of business man Ranjit Katyal. He knows how to do business, and all change when Iraq invades Kuwait. He watches his driver die shot by an Iraqi solider and then he involves himself in getting the Indians united and ensuring their survival by coming together – aka Ek Chidiya Anek Chidiya. 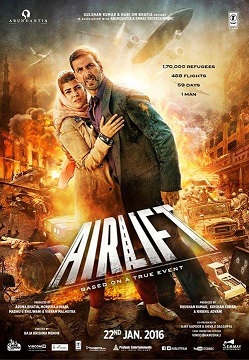 Ok, now back to the review. Mr. Katyal (a Punjabi) contacts Ministry of External Affairs in Delhi without much help, but only one person in the department helps and tries to tie things together – a Mr. Kohli (another Punjabi). Now you getting the gist? If this was a true story, then when not take real names and if you do not want to take real names then keep it as close to the character. Yes suspension of disbelief is there in movies, but not if the claim is on research and based on true events.

The evacuation is done, and Vande Matram is played with the Indian flag been raised in background. Happy Republic day to all. The movie plot moved seamlessly with good balance on acting and less hamming.

Why Racist: Why is that stereo typical to show Punjabi as savior, when the real hard work was done by Mallu Christian (Mathunny Mathews). In the current storyline there is there a Mr. John, an irritating character who was getting into the nerve of the protagonist and even the audience. If they reversed the names, what would be the reaction? Mathunny Mathews (popularly known as Toyota Sunny), Harbajan Singh Vedi and others who were based in Kuwait were the ones who participated in help the Ministry of external affairs.

My experience of Ministry of External Affairs has been good, and when I had an issue in a foreign African land, they stepped in. I was apprehensive, but my father advised and we walked inside the Embassy and was treated with respect and dignity. So again type casting against that nothing works in the government.

These type casting can create issues at a subconscious level where perceptions can be built.